Login / Register
No longer available for purchase at Cloudwater. Can be purchased in 1 beer shops. 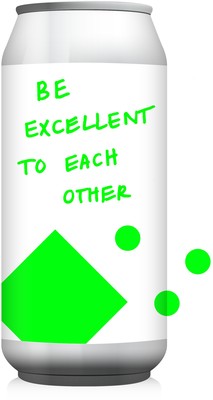 Join us for our next virtual tap room event.
Every week we take a look at our freshest releases and also feature a selection of beer from an incredibly talented guest.
This time round, the guest is our excellent friend Andrew Schwartz from those Cali legends Modern Times.
Andrew has chosen a selection of beers for you to enjoy during the event that best represent what the brewery is all about and we've brought them in super-fresh for you.
So grab a pack and tune in at 7.30pm on Wednesday June 10th as we dive into beers from ourselves and Modern Times, joined by Andrew himself.
Don't worry, we won't be drinking all six during the broadcast - enjoy them all at your own pace and you'll be able to rewatch the event in your own time too.

Be Excellent To Each Other Pack 1
1 x 473ml can of Modern Times ICE, 4.8% Pilsner. Modern Times say: "The flavor: cold. The crushability: maximum. Ice was our very first pils, and it brings the noise. Hopped with Czech Saaz hops before, like, so many weeks of lagering, Ice packs the flavor of the mighty San Diego mountains into a compact, low-ABV package."

1 x 473ml can of Modern Times Black House, 5.8% Stout with house-roasted coffee. Modern Times say: "It’s so great that you like coffee. I just love that about you. Speaking of which, you’re holding an oatmeal coffee stout positively redolent with coffee aroma and flavor. It kind of tastes like a chocolate-covered espresso bean, only drier and more like beer. Nifty fact: we’re one of the only breweries in the world to roast our own coffee, which allows us to be extremely persnickety about which beans we buy and how we roast them. Taste the persnicketiness!"

1 x 473ml can of Modern Times Star Cloud, 6.8% Hazy IPA with Citra, Cashmere and Motueka. Modern Times say: "There is simply no way to adequately prepare your taste receptors for the jaw-dropping deluge of flavor contained herein. Packed with financially irresponsible amounts of incredibly choice Citra, Cashmere, and Motueka hops, this hazy IPA is a miraculously tasty juice-bomb replete with notes of tangerine, lime, citrus, and tropical magic. It’s a seriously excellent combo that may leave you with an intense desire to high-five the can."

1 x 567ml can of Modern Times Fruitlands Mai Tai Edition, 5.8% Sour with orange, lime and pineapple. Modern Times say: "Fruitlands is tart, fruity, and frighteningly delicious. The sour, salty base beer lays down a stellar foundation for heavy doses of orange, lime, & pineapple, yielding a ridiculously tasty wall-to-wall tropical fiesta. It’s a marvelous mix of elements that collides with your mouth like a fruit-filled asteroid of flavor traveling at the supersonic speed of party."
1 x 440ml can of Cloudwater West Coast IPA, 6%
1 x 440ml can of Cloudwater The Edge Of The Bread, 6% DDH IPA with Citra, Idaho 7 and Galaxy
Be Excellent To Each Other Pack 2

1 x 473ml can of Modern Times Themisto, 6.5% Hazy IPA with Citra, El Dorado, Nelson, and Amarillo. Modern Times say: "This spectacle of haze-craft will feature a four-way power punch of Citra, El Dorado, Nelson, and Amarillo hops, resulting in a glorious detonation of tropical fruit and peach character that will approximate a liquid summer vacation."
1 x 440ml can of Cloudwater West Coast IPA, 6%
1 x 440ml can of Cloudwater The Edge Of The Bread, 6% DDH IPA with Citra, Idaho 7 and Galaxy

Before the event, you'll receive an email letting you know how to join. See you there!