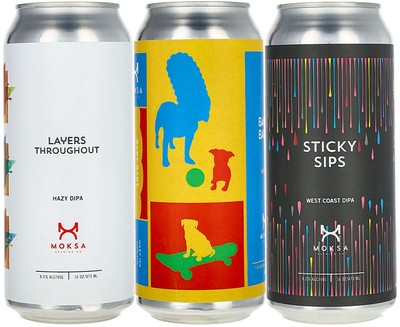 For the very first time, we're proud to present two absolute hop-bombs from Moksa Brewing Co out of California.
This bundle contains 1 of each of the following-

Layers Throughout - Hazy Double IPA dry-hopped with Strata and Citra. Smooth notes of pineapple and yellow peach with a touch of dank.

Sticky Sips - California Brewers Cup Gold Medal winning Double IPA. Highly hopped West Coast Double IPA using over 7.7 lbs per bbl of Mosaic and Nelson Sauvin hops. Tropical flavors with a touch of blueberry and moderate bitterness keep your palate asking for more.
A little more about Moksa -  Moksa (or Moksha) is a term in Hinduism and Hindu philosophy. This term refers to various forms of emancipation, liberation, and release. This is our mantra, the entire reason behind the name Moksa Brewing Co. Continually striving to create an art within beer that separates itself from the constraints of classic beer styles and traditional brewery philosophies. Trailblazing down a path that deviates from the norm Established in 2017, Moksa Brewing Co. opened its doors February of 2018. A small independent craft brewery, whose brewers come from a rich, professional brewing background. Possessing years of experience, Moksa Brewing Co. has been able to produce a wide range of styles with unparalleled quality.

Beerizer is a one man hobby project. Support the development and get access to exclusive functionality. Get started today with a 7 day free trial.
Support
Change history Premium
Become a Premium member to see how the price and availability of this beer changes over time